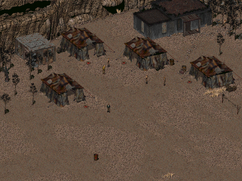 By the year 2242 the area above Vault 15 has been inhabited by a group of squatters whom had discovered it while exploring the wastes. They soon after set up tents by the mountainside just west of the entrance to Vault 15; however, they soon wound up in a diplomatic battle with the neighboring town of NCR who was trying to gain access to the vault from which their ancestors had emerged.

A grouping of tents, small buildings and some trees up against the side of a cliff. There are squatters wandering the area.

The Squat appears only in Fallout 2. 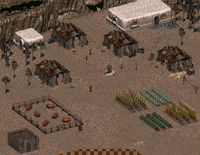 The Squat after joining the NCR 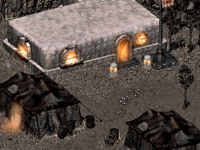 The Squat in the good ending 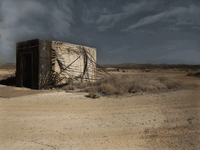 The Squat in the bad ending
Add an image to this gallery
Retrieved from "https://fallout.fandom.com/wiki/The_Squat?oldid=3063489"
Community content is available under CC-BY-SA unless otherwise noted.