The Spirit of Taking

The Spirit of Taking

10h
“So much for the spirit of giving! Some heartless Raiders have robbed a Wasteland Settler and stolen a gift meant for his friend.”

The Spirit of Taking is an overseer quest in Fallout Shelter, available only during the Christmas season.

This quest takes place in a red brick building with a random layout, with around seven floors. Enemies may include radroaches in groups of three, ghouls in groups of three, and raiders in groups of three. Near the bottom of the vault, the settler can be spoken to, and you are given a choice for him to join the vault or a cap reward. If he joins the vault, he is a rare level dweller wearing a Santa suit. At the bottom of the building is the raider leader, accompanied by two additional raider who can be spoken to. A fight here is optional depending on the dialogue option chosen, but either way, a pet carrier is rewarded. A rare junk, rare weapon, and rare outfit can also be found in the same room the leader occupies. You won’t get the pet if you fight the raiders at the end 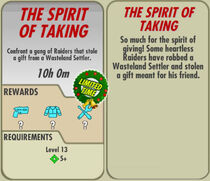