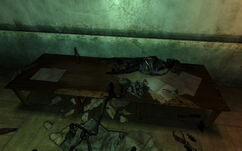 The Sorrowful Suitor[1] is an unmarked quest in the Fallout 3 add-on Broken Steel.

In the Presidential metro, right before taking the train to Adams Air Force Base, go up the nearby stairs and one can find a holodisk called Sorry, my darling next to a skeleton on a bench. The disk contains the apology of an unnamed woman to her "darling" for not being able to make it to their meeting point in La Maison Beauregard after all he had to go through to get the "special gift" for her.

Arriving at La Maison Beauregard through Georgetown East, one is confronted by a hostile character called Lag-Bolt. Aside from his unique armor and shades, he also carries the key to a suitcase nearby in which one will find the "special gift," the all-nighter nightwear.

Retrieved from "https://fallout.fandom.com/wiki/The_Sorrowful_Suitor?oldid=3244695"
Community content is available under CC-BY-SA unless otherwise noted.