00027556
“You ever listen to the Silver Shroud? That's who we need. No matter how bleak things got he'd save the day.”— Kent Connolly

The Silver Shroud is a side quest in Fallout 4.

After listening to Silver Shroud Radio near Goodneighbor, the quest will be added. From here, go to the Memory Den and speak to Kent Connolly and agree to find the Silver Shroud costume. A Persuasion check can be passed to get some caps upfront.

Head to Hubris Comics. Upon reaching the second floor, a Silver Shroud photo can be found in a display case next to a baseball bat and ball, which can also be given to Kent as well as the Silver Shroud script, found on the third floor next to the producer's terminal. On the top floor, in the studio behind the backdrop, the Silver submachine gun prop can be found. Grab the Silver Shroud costume (which cannot be removed from inventory until the quest has been completed) from the studio and return to Kent. He will give the Sole Survivor the agreed reward, plus a little extra for the Silver Shroud memorabilia (up to 320 bottlecaps). He will then offer the player character the suit, gun, and a few stimpaks after a Persuasion check. One can decline the offer, which will leave the quest open with the objective, "talk to Kent."

Conversely, the offer can be accepted, after which Kent gives the player character instructions to listen to Silver Shroud Radio station while in Goodneighbor. The Silver Shroud submachine gun is not required for the quest, however, it is necessary to wear the Silver Shroud costume to get "Speak as the Shroud" response options.

While in Goodneighbor, listen to the radio to obtain the first target, Wayne Delancy, behind the Hotel Rexford, who is accused of murder. Wayne is not immediately hostile and therefore can be spoken to as the Shroud. One will have the option of asking Wayne about the murder while speaking as the Shroud, which Wayne will confess to. The confession can also be coerced by simply threatening him. Regardless of the approach, Wayne must be killed and a Silver Shroud calling card must be left on his corpse.

The next target is AJ, near Bobbi No-Nose's place, who is accused of selling drugs to children. AJ has two bodyguards with him, but he and his party are not immediately hostile. AJ gives the option to take a bribe to leave him alone. One can either kill AJ and leave a calling card, or accept the bribe (50, 75, 90 or 200 caps) depending on the level of Persuasion.

Once AJ has been handled, the next target is Kendra. To reach her, ask Whitechapel Charlie in the Third Rail where she is. He'll ask for money but speaking like the Silver Shroud or passing a speech check will convince him to give the info for free, with Charlie advising that she can be found in Water Street apartments just south of Goodneighbor. Travel to the apartments and eliminate the raiders inside while working one's way through the building. Upon reaching the top of the stairs, there is a hallway that has been laced with mines and a machine gun turret at the far end. Go through the doorway to the right at the end of the hallway and speak to Kendra. She will tell the Sole Survivor that they are in over their head before attacking. Kendra also has a contract to kill Shelly Tiller at the National Guard training yard, which if completed, the reward can be collected just outside of Goodneighbor. Leave the calling card on her and head back to Goodneighbor.

Upon returning to Goodneighbor, the radio station will broadcast that John Hancock wants to meet with the Silver Shroud. Go to the meeting and he will task the Shroud with taking down Northy and Smiling Kate. The previous targets were working for them, and they all work for Sinjin. There are a couple of Persuasion checks that can be passed, but these require breaking character. Doing so has no negative effects however, an additional 50 caps are given upfront for the job.

Once both parties have been eliminated, leave a calling card on the corpse of either Kate or Northy. On the corpse of whichever of the above two was killed last will be a holotape. By listening to it, the Sole Survivor learns that Sinjin has targeted Kent. Return to the Memory Den in Goodneighbor and speak to Irma. She will explain that Kent was taken by a group of armed raiders. Tune in to Silver Shroud Radio to learn that Sinjin has taken Kent to Milton General Hospital. If Irma has been killed before reaching this stage in the quest, one will not be able to talk to her in order to continue the quest. However, going to Milton's General Hospital will allow the quest to proceed as normal. Upon arriving, there may be super mutant opposition at the adjacent locations. It is recommended to save right before entering the building and be sure to enter dressed as the Silver Shroud as several bugs have been reported which cause Kent to be killed prematurely.

The hospital is littered with raiders and traps as one makes their way down to the basement and follows the winding path. Take the last elevator to confront Sinjin. From here there are several options:

The quest was primarily designed by Ferret Baudoin, while lead designer Emil Pagliarulo came up with the character of the Silver Shroud and wrote the in-game radio plays.[Non-canon 1] 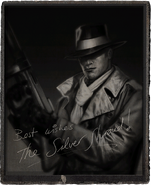