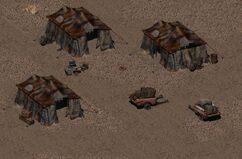 The Shrine is a location cut from the final version of Fallout. It was the headquarters of the Vipers gang in 2161.

The Vipers hideout, or as they call it "The Shrine," is made of many small abode buildings surrounding a large pit. This pit is where they conduct their religious ceremonies. The sacrifices are placed within the pit and several huge pit vipers slither out to claim their meal. Although it has never happened, if anyone were to escape the pit, the Vipers would let that individual go, claiming it was the will of the Great Snake.

This is the large pit that lies in the center of the Viper's camp. It currently holds four giant pit vipers. Each one is old and very well fed, but they are still very deadly. The pit itself branches off into many tunnels, where the player character can find Faust's old staff, as well as many nests of rats. One of the tunnels opens up into a secret exit near the mountains, so a resourceful player character could use it to escape after being hurled into the pit.

The location where Asp sleeps and attends to the governmental duties of his people. His second in command, the High Priestess of the Great Snake, is always close by. They have no children. The meeting room itself is long and lined with torches. The throne Asp sits on was made from the skulls and bones of the two snakes that Faust killed during the Great Awakening.

This is where the prisoners are kept. Located at the very edge of the Oasis (they cannot taint the snakes with the unbelievers), these pits are dug into the ground. Their entrances are made of iron grates set into the stone ground of the oasis. They are usually guarded by the Crimson Tongue, the special elite warriors. They are heavily guarded as the cages are used to hold the sacrifices to the Children.

This is the ceremonial lodge used in the Time of Summoning. This is also used for all religious purposes, except the Snake Sacrifice, which is done on a platform set up over the pit.

The Shrine was cut from the final release of Fallout.

Retrieved from "https://fallout.fandom.com/wiki/The_Shrine?oldid=3209535"
Community content is available under CC-BY-SA unless otherwise noted.