The Secret of [REDACTED]

“Keep this to yourself, but we've been contacted by one of our deep agents, codename Moley, who says he's uncovered a massive conspiracy with vast ramifications. Go over to Vault 322 to hear Moley's big story!”

The Secret of [REDACTED] is a single-stage overseer quest in Fallout Shelter.

You are sent to a vault to find out about some great conspiracy, and will meet very secretive settlers. However, in this standard randomized vault, they will not be hostile if you choose the correct speech options (see below). In the second room you will meet the first group, then fight your way against multiple creatures such as radscorpions, molerats, or deathclaws, to reach the other two rooms containing information about a conspiracy going on that will probably blow your mind.

The mentions of "23 skidoo" and "Discordia" as well as the overall theme of conspiracy are probably a reference to the religion of Discordianism and The Illuminatus! Trilogy which is a series of novels exploring said religion. 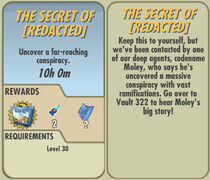 Rewards
Add an image to this gallery
Retrieved from "https://fallout.fandom.com/wiki/The_Secret_of_(REDACTED)?oldid=3282118"
Community content is available under CC-BY-SA unless otherwise noted.