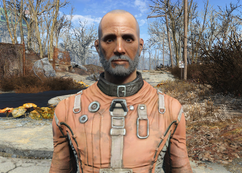 “Good to see you again. Are you in a trading mood? I have a few pieces of armor you might be interested in.”

The Scribe is a randomly encountered merchant in the Commonwealth in 2287.

This scribe is a former member of Lyons' Brotherhood of Steel in the Capital Wasteland. Once a proud member of the Brotherhood, he gradually became disillusioned with its leadership after Arthur Maxson took over as elder, believing the Brotherhood was becoming too self-serving in contrast to Owyn Lyons' more altruistic beliefs. He eventually left the order and has since then been traveling the wasteland as an armor merchant.[1] He is now looking to settle somewhere to ply his trade.[2]

The Scribe can be recruited as a settler once the settlement population cap reaches 10.

The Scribe appears only in Fallout 4.

Even if the player character meets the requirement to hire him he may not give the option to send him to a settlement.[verified]

Retrieved from "https://fallout.fandom.com/wiki/The_Scribe?oldid=3329299"
Community content is available under CC-BY-SA unless otherwise noted.