21h
“Folks are being stung all over, and the problem is coming from Earl's Radscorpion Emporium. Time to put him out of business.”

The Scorpion... King? is a single-stage overseer quest in Fallout Shelter.

An entrepreneur calling himself the Radscorpion Earl has got into the business of milking radscorpion venom. The trouble is his reckless failure to securely contain his specimens; many a wastelander has been stung by his growing collection. The player's more agile dwellers (5+ Agility) can be sent out armed with plasma pistols to deal with him before the problem gets worse.

The quest takes place in a randomized medium-sized factory building, usually with four floors. Enemies include raiders, in groups from two to five, and many radscorpions, mostly in packs of three. There is one glowing radscorpion accompanied by two standard variants, which when killed will satisfy an optional objective. There is no significant loot that is guaranteed to spawn, although rare junk or legendary junk may be found on occasion.

This quest's name is a reference to the 2002 movie The Scorpion King. 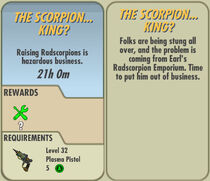