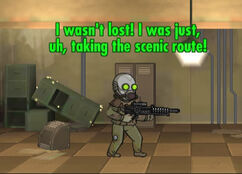 Rare weapon
Rare outfit
Rare/legendary junk item
Bottle caps
Nuka-Cola Quantum
“A keen-eyed Wasteland explorer has spotted a lonely cabin in the distance. Looks like someone, or something, is lurking inside.”

The Scenic Route is a random encounter in Fallout Shelter. It can be triggered by any dweller who is exploring the wasteland.

There are two rooms in the cabin, the first of which contains three powerful ghouls. The second room contains a stranded wastelander who can be talked to. The wastelander can either be invited to the player's vault, or left in the cabin.