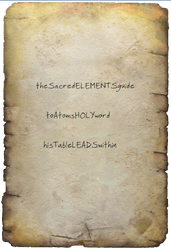 The Sacred Elements is a paper note in the Fallout 4 add-on Far Harbor.

After having drunk from Atom's Spring during Visions in the Fog, it can be found on the shelf across from the metal doors at the Children of Atom shrine.

Retrieved from "https://fallout.fandom.com/wiki/The_Sacred_Elements?oldid=3401099"
Community content is available under CC-BY-SA unless otherwise noted.