The Rusty Pick is a location in the Ash Heap region of Appalachia.

Located on the northern slopes of the ruined Mount Blair, the Rusty Pick was a tavern frequented by miners for decades. In the words of its last owner, it was an old tavern with a secret meeting hall built into the old mine access. Used by the miners after their shifts, the tavern was run by an older woman, Clara Webber, whose husband and sons were killed in a mining accident. Passed down through her family, the forgotten mine access was used as a speakeasy during Prohibition, and then as a secret meeting hall for the labor unions.[1]

When Hornwright Industrial started to lay miners off, replacing them with Auto-Miners purchased from Atomic Mining Services, it also became a nucleus of popular resistance for the miners. They were angry with the executives and paper-pushers who fired miners with no severance or warning, as per the contracts they were expected to sign. The miners organized a resistance movement, protesting the firings in Watoga and at Mount Blair, together with civil disobedience meant to slow down work at the Rockhound atop Mount Blair.[2][3]

However, several miners were arrested for assault after throwing rotten tomatoes at the Hornwright CEO's limousine. Others were arrested for trespassing on private property after the property line "mysteriously" moved a hundred feet overnight, just so the police could arrest the miners. With Sam Blackwell forced into hiding and AMS goons seizing homes whenever ultracite appeared, the miners felt that they had no recourse but armed resistance. The miners organized strikes against the Mega Mansions of the corporate executives, killing two and injuring several with bombs they had stolen themselves.[4][5]

The government retaliated by sending automated security forces after the miners, including strikebreaker robots designed to suppress - and kill - any who would resist the corporate onslaught. At some point, the tavern was bought out by Hornwright Holdings Conglomerate, a division of Hornwright Industrial. Health code violations followed, and although they were dismissed as "unsubstantiated," the establishment was closed for a short time. Food critic Glen Ramos sued the Rusty Pick, alleging that the famous shepherd's pie was made with expired InstaMash, though he lost the suit and the tavern eventually reopened.[6] The day before the Great War, a local musician named Jesse White was to perform a set of songs.[7]

At some point after the Great War, a group of raiders ransacked the tavern.[Non-canon 1] Later, in 2103, Purveyor Murmrgh relocated her shop to the tavern after leaving her previous stall at Berkeley Springs Station.

Both entrances to the Rusty Pick lead into the bar area. When going through the main entrance, the bar is on the left along with a hallway. Down the hallway are two bathrooms with stalls that may contain loot. Moving straight forward when entering leads to an empty room with a staircase leading downstairs. Downstairs is some random loot, a weapons workbench, Mick Flanagan's terminal and a cage with power armor in it. Across from the power armor is a tunnel covered with vines. Following that will lead to a walkway, and then on the left is a room containing a safe and some mole miners. On the roof of the Rusty Pick is a cooking station. There is also a U-Mine-It! vending machine and a Garrahan excavator poster outside of the bar near an ice machine.

With the release of the update Wastelanders, Purveyor Murmrgh's location moved from Berkeley Springs Station to the Rusty Pick, overhauling the layout of the location's interior.

The Rusty Pick appears in Fallout 76. 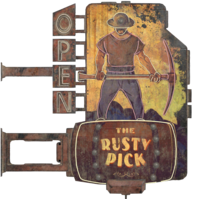 Faulty assaultron in the chair

New location of Your order's arrived

Rack with pieces of kindling armor that cannot be picked up