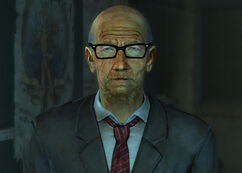 Dr. Zimmer or holotapes or various

The Replicated Man is a Fallout 3 side quest. It is a PC and Xbox 360 achievement, and PS3 trophy. The quest follows the story of an unidentified humanoid robotic prototype, an android, who is hiding from its creator somewhere in the Capital Wasteland.

The quest is given to the player character by Dr. Zimmer in Rivet City, who tasks the Lone Wanderer to track down an android that has escaped. The android has gone independent and does not wish to return. Alternatively, the quest can also be started by finding one of the Replicated Man holotapes. The quest can also be started when approached by Victoria, who asks the player character to stop asking so many questions and later tells them about an android who thinks he is human.

After the quest has started, three more clues need to be found. Generally, these are tied to certain non-player characters with two options to obtain a clue from each of those people: through dialogue or by finding a holotape/terminal in the person's possession or room. For details on who these people are, please see Replicated Man holotapes.

If asked where to start tracking down the android, then Dr. Zimmer suggests searching the offices of "doctors and techies" and adds the optional objective of talking to Dr. Preston in Rivet City. Preston hands the Lone Wanderer one of the android's recordings and tells them that similar tapes were sent to almost every doctor in the Wastelands.

At any time during this quest (including underwater), one may be approached by a woman named Victoria Watts of The Railroad, an organization dedicated to helping androids gain their independence. Herbert Dashwood, Tulip, Father Clifford and Manya Vargas are also members of the Railroad. She asks the player character to tell Dr. Zimmer that the android is dead, and gives them a piece of his body to support the claim. If the quest has not been started yet (e.g. the holotapes have been obtained, but not viewed), it will then begin. After receiving the android component, one can simply end the quest by giving it to Zimmer. However, the reward for taking this path is small compared to the other two endings' rewards. If the player character does not choose to finish the quest using this method, then the dialogue options for Victoria Watts will stay the same as when she first meets them, even after completing the quest using any other method.

After obtaining the third clue, A free man... a new man..., the Wanderer learns that Horace Pinkerton, in the broken bow near Rivet City, "reconstructed" the android, making him the only one who knows the android's current appearance and whereabouts.

There are two ways to enter the bow section, either by picking a locked door (100 Lockpick skill required) on the starboard side or by entering an underwater door where the bow section has broken off. The latter requires the Lone Wanderer to swim a moderate distance through irradiated water. If this mission is put off until a Lockpick skill of 100 is met, then the long route may be bypassed; without the required Lockpick skill swimming is the only option. The quicker, less radiation way is simple: climb the ship to the deck, and then slip off the side at the bow. Go down as low as possible before falling through the floor to the water. No damage is taken, and fewer rads.

Note: The door can be unlocked from the inside, and locked (Easy) for a small amount of XP, using the switch.

Head to the back of the marketplace to a door outside, where one should be facing the broken bow. Drop into the water and swim down to the right, where there should be an opening with a door. On the other side is a flooded hallway, so swim quickly forward and surface for air. Assuming one came straight through the door and are now in the middle facing away from it, there will be a tunnel/hall to the right; face that way and go under towards it, open the door, and keep going straight to another door, open it, and come up for air. Enter the door that was just opened, then the next door on the left, through another door ahead, then go up the stairs, and into a room which is out of the water. Several traps, mines, and leveled mirelurks protect this section of the broken ship.

When the player character finally speaks with Pinkerton, he will reveal that the android's name is Harkness and that he personally performed the facial reconstructive surgery and memory wipe. He will also reveal that Harkness' mind was not actually wiped, but rather his old identity has been buried deep and that it can be reactivated by means of a certain code word. Harkness is now employed as the security chief in Rivet City and was actually the person who greeted the Lone Wanderer upon arrival in Rivet City. Pinkerton also gives them the password to his terminal downstairs; the information from the terminal can be downloaded to one's Pip-Boy as proof to Harkness who will want to see it. Harkness can be confronted directly about this even if the terminal entry hasn't been read.

The easiest way out of this area of the ship is through the "Very Hard" locked door. On this side of the door is a switch that can be activated to unlock the door. This makes going back to Pinkerton for any reason much simpler.

There are now several possible courses of action which will complete the quest:

Retrieved from "https://fallout.fandom.com/wiki/The_Replicated_Man?oldid=3351334"
Community content is available under CC-BY-SA unless otherwise noted.
... more about "The Replicated Man"
RDF feed
Has platform
PC +, Playstation 3 +  and Xbox 360 +