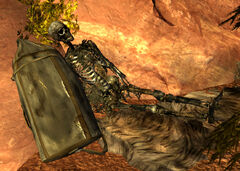 “It's cold enough that I won't last long on the high mound up next to Red Gate. I think I've got enough breath left in me to make it. I'll just lie down and stare at the sky. Feels right.”— Randall Clark

The Red Gate is a location in Zion Canyon in 2281. It is located north-northwest of the Red Rapids docks.

Located on top of some rocks overlooking the river, the area contains the remains of Randall Clark, known as the "Father" to the Sorrows, and his pack containing miscellaneous loot, along with the Survivalist's rifle and the Year: 2124 holotape.

Clark's remains and his pack can be found by continuously going around the rock formation and eventually reaching it. A way up can also be found to the northwest of the Red Gate; red dirt goes halfway up, and a steep rock slope is barely climbable the rest of the way. Clark's remains can be found against a rock formation facing west-northwest (his gaze looks directly at Bighorn Bluff if viewed on the Pip-Boy's world map), obscured behind three evergreen trees.

White Legs can sometimes retrieve the Survivalist's rifle before the player character does, and use it against them. The same can happen if Waking Cloud or Follows-Chalk is a companion.

The Red Gate appears only in the Fallout: New Vegas add-on Honest Hearts.