“People of the Commonwealth. Do not interfere. Our intentions are peaceful. We are the Brotherhood of Steel.”

The Prydwen is a modified and armored Brotherhood of Steel airship that flies throughout the skies of the Commonwealth. The vessel serves multiple roles for the Brotherhood, including those of aircraft carrier, command center, clinic, personnel quarters, equipment maintenance bay and research facility. It is, for all intents and purposes, an airborne military base. It is currently moored to the Air Traffic Control Tower at Boston Airport.

The Prydwen was constructed at Adams Air Force Base over a period of six years. It took an initial two years to collect the materials necessary and another four to actually construct the airship, and by 2287 had been in service for five years.[1] It weighs forty thousand tons, as noted by Lancer-Captain Kells and Elder Maxson. The nuclear core was taken from an old aircraft carrier as the previous one was not sufficient to efficiently power all the systems.

The airship is filled with hydrogen, as stated during the quest Airship Down. Four pylons attached to the ship's flight deck carry a single jet engine each, being responsible for controlling the Prydwen's altitude and help to keep the ship aloft. There are four docking hooks for Brotherhood modified VB-02 Vertibird gunships attached to the airship's hull. Vertibirds are accessible via the flight deck. Due to the combustible nature of hydrogen, the ship itself is not capable of combat, and this is stated by the crew.

The Prydwen is divided into two exterior areas and two indoor areas: the flight deck, the command deck, the main deck, and the forecastle.

On the main deck is a medical bay, mess hall, power armor station, crafting equipment and a shop (at the end of the corridor). There are also stairs that lead either up to the living quarters or down to a storage area. Around the perimeter and along the top are patrolled catwalks. The main deck is contained within the airbag, as the hydrogen is inside several canisters positioned around the outer hull.

The flight deck is located along the midsection of the gondola. There is a control room/storage area overlooking the deck, accessible at the back of the flight deck.

The command deck has three levels. The top level has Maxson's observation deck. The next one down is a storage area, with access to the forecastle. Finally, the bridge is at the bottom, where Lancer-Captain Kells can be found.

The forecastle is a small balcony which is accessible from the top the command deck. 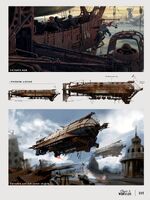 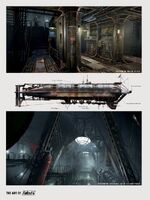 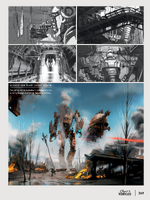 Concept art
Add an image to this gallery

Retrieved from "https://fallout.fandom.com/wiki/The_Prydwen?oldid=2695630"
Community content is available under CC-BY-SA unless otherwise noted.