"People of the Commonwealth. Do not interfere. Our intentions are peaceful. We are the Brotherhood of Steel."

The Prydwen is a modified and heavily armored Brotherhood of Steel airship that flies throughout the skies of the Commonwealth. The vessel serves multiple roles for the Brotherhood, including those of aircraft carrier, command center, personnel quarters, equipment maintenance bay, and research facility. It is, for all intents and purposes, an airborne military base.

The Prydwen was constructed at Adams Air Force Base over a period of eight years. It took an initial four years to collect the materials necessary and another four to actually construct the airship. It weighs in at forty thousand tons, as noted by Lancer Captain Kells. The nuclear core was evidently taken from Rivet City as the previous one was not sufficient enough to efficiently power all the systems.

The airship is filled with hydrogen, as stated during the quest Airship Down. Four pylons attached to the ship's flight deck carry a single jet engine each, being responsible for controlling the Prydwen's altitude and help to keep the ship aloft. There are four docking hooks for Brotherhood modified VB-02 Vertibird gunships attached to the airship's hull, vertibirds being accessible via the flight deck.

On the Main Deck is a medical bay, bar, power armor station and crafting equipment, a shop (at the end of the corridor). There are also stairs that lead up to the living quarters.

The Prydwen appears only in Fallout 4. It will show up right after the main quest Reunions is finished, flying in over the western mountain range of the map and making its way across the Commonwealth, until it finally anchors above the Boston Airport. After this, the Sole Survivor can visit it during the Brotherhood of Steel quest Shadow of Steel offered by Paladin Danse.

Its remains can be visited if destroyed, and respawning Brotherhood corpses can be found and looted. Brotherhood of Steel scribes, knights, and paladins may appear and attack the Sole Survivor. 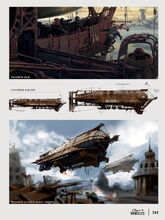 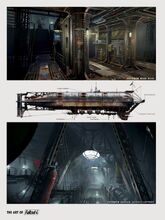 Prydwen--.jpg
Arrival
Add an image to this gallery

Retrieved from "https://fallout.fandom.com/wiki/The_Prydwen?oldid=2505788"
Community content is available under CC-BY-SA unless otherwise noted.