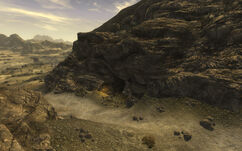 The Prospector's Den is a location in the Mojave Wasteland in 2281. It is directly southeast of Primm and southwest of the emergency service railyard.

From what can be evidenced by the number of prospector corpses scattered throughout the location, the Prospector's Den was a safehouse and rest stop for the scavengers of the Mojave Wasteland. In recent times, a local gang of Jackals presumably slaughtered all of the prospectors holed up inside, subsequently taking it over and using it as a hideout.

The Prospector's Den is a simple cave with a building constructed inside. When first entering the location, there will be many dead prospectors on the ground with loot such as weapons and caps. The building has three rooms, the first of which serves as a living room and kitchen. It contains two beds, cabinets, a jukebox, a radio, and a refrigerator.

The second room, which serves as the main living quarters, has eight footlockers and eight mattresses with a dead prospector lying on one of them. The third room acts as a small maintenance shack. It has two shelves, a first aid box, a reloading bench, and a generator.

Initially, the Prospector's Den will be inhabited by Jackal gang members (headed by a gang leader), who have raided the den and killed the prospectors inside. Should the Courier clear out the location, a new group of prospectors, including two NCR prospectors and a prospector merchant will move in shortly afterward, and the den can be used as a safehouse.

The Prospector's Den appears only in Fallout: New Vegas.

Exterior of the building

Add a photo to this gallery
Retrieved from "https://fallout.fandom.com/wiki/The_Prospector%27s_Den?oldid=3450568"
Community content is available under CC-BY-SA unless otherwise noted.
... more about "The Prospector's Den"
RDF feed
Has platform
Playstation 3 +, PC +  and Xbox 360 +