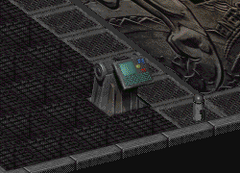 The Project is a holodisk in Fallout 2.

Downloaded from the terminal on the entry level of the oil rig (Science 150% required).

It is my honor, and happy privilege, to report the near completion of The Project. After years of work, we've managed to isolate the most toxic elements of the F.E.V. virus. Some of the only recently decoded information that we retrieved from the abandoned military base on the mainland has been instrumental in advancing our research.

By backtracking somewhat in our research, and with the help of the additional information from the military base's records, we've been able to turn our version of the F.E.V. (F.E.V. Curling-13) into a far more toxic agent.

Final tests conducted on the vault-descendant subjects, from the village "Arroyo," have shown a survival rate of zero-percent, with most deaths occurring within one-hour of exposure to a .0001% aerosol solution. By contrast, the subjects extracted from Vault 13 tend to suffer subdural hemorrhaging and convulsions within one-hour of exposure, with death not occurring, on average, for another 14.5-hours.

In either case, the F.E.V.'s toxicity levels are now sufficient to insure a "clean-sweep" of all infested (i.e. non-Enclave) locales. Current releasable levels of F.E.V. Curling-13 show a 95% probability of .00007% average saturation. While the consensus of the Chemical Corps is that this would be a sufficient level to insure the success of the Project, we believe that it is worth waiting until we can accumulate enough F.E.V. toxin to reach our .0001% saturation and 99.5% extermination level goal.

Congratulations, ladies and gentlemen, our long years of work are nearly at an end.