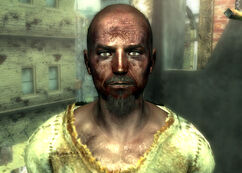 The Preacher (simply called wastelander in-game) is a crazed inhabitant of Seward Square in 2277.

The Preacher is standing on the second floor of a building in an alleyway west of the Ranger compound entrance in Seward Square. From there he preaches mad "logic" to anyone that can hear him. He rants about the apocalypse, the sun, his headache and an evil worm that he plans to blow up. The alley he overlooks has been rigged with 5 frag mines and 5 mini nukes that he detonates if the Lone Wanderer tries to get close to him. There is a hostage (another wastelander) at the east end of the alley the Wanderer can talk to about the booby-trapped alley and the Preacher.

The Preacher appears only in Fallout 3.

The Preacher reaching out to his community

The Preacher and his hostage

Add an image to this gallery
Retrieved from "https://fallout.fandom.com/wiki/The_Preacher?oldid=3125382"
Community content is available under CC-BY-SA unless otherwise noted.