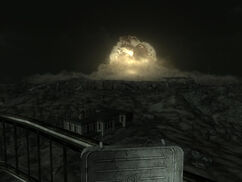 Complete The Power of the Atom

Side with Simms[edit | edit source]

Side with Burke[edit | edit source]

If the bomb is disarmed[edit | edit source]

If Megaton is destroyed[edit | edit source]

Mister Burke draws down on Lucas Simms
Add a photo to this gallery
Retrieved from "https://fallout.fandom.com/wiki/The_Power_of_the_Atom?oldid=3244346"
Community content is available under CC-BY-SA unless otherwise noted.