The Pitt
“HAHA! I love it. Another slave wandered back here, huh? What's wrong, couldn't get over the bridge? You're lucky I don't fuckin' paste you.”— Mex

According to terminal entries found in the Pitt Downtown, the bridge is a reconstruction of the Wabash Bridge, modeled after the 10th Street bridge.[2] The bridge is the only means of entrance to the Pitt, and is used by the Pitt raiders to control traffic in and out of the city. The Pitt raiders placed mines and other traps to stop Pitt slaves from escaping across the bridge or to keep out unwanted visitors, and a sniper to eliminate anything the mines miss.

At the south end of the bridge, there is a wildmen camp in a ruined building. A mole rat, two dogs, and three wildmen patrol the bridge. A hostile raider armed with a sniper rifle patrols on a jury-rigged walkway suspended from the bridge's north tower. By climbing up the scaffolding on the pedestrian walkway, it is possible to reach the sniper's nest to loot the sniper's rifle and several boxes of ammunition. It also has a bed that can be rested in to gain Well Rested. The northern end of the bridge serves as the entrance to the Pitt Downtown, where the main gate is guarded by Mex. The Monongahela River under the bridge is highly irradiated up to deadly levels.

The Pitt bridge appears only in the Fallout 3 add-on The Pitt.

The Pitt bridge is based on the real South Tenth Street Bridge,[2] a bridge that crosses the Monongahela River in Pittsburgh. It is in the location of the Wabash Bridge, another real bridge in downtown Pittsburgh, demolished in 1948.

The bridge as seen from the city

The bridge as seen from the sniper nest

The bridge overlooking the city 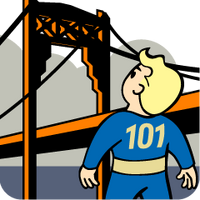 As seen in Into The Pitt