The Pitt Downtown is a location in the Pitt in 2277. It is a medium-sized settlement that is inhabited by raiders and slaves, and has one interior section.

Prior to the Brotherhood's Scourge of the Pitt, downtown, like the rest of the city, was completely lawless and inhabited by raider gangs. However, since Ashur took control of the city and assimilated or killed all of the raiders, downtown has since been turned into an oppressive slave den. The citizens of the Pitt who survived were sent to downtown where they would live as slaves. Downtown can be considered the opposite of the "higher class" Uptown.

When first entering, one will encounter a work zone where a raider is ordering slaves to cut up metal. To the left is the entrance to the Mill, and to the right Midea's quarters can be found.

The Pitt Downtown appears only in the Fallout 3 add-on The Pitt. 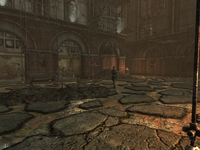 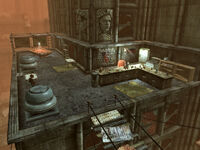