The Path of Paula Plumbkin

“You've found the journal of Paula Plumbkin, an Overseer who went searching for the mythical utopia, Vaultopolis. Follow in her footsteps! First stop - Vault 730.”

The Path of Paula Plumbkin is an overseer quest and the first part of the Journey to the Center of Vaultopolis multi-stage questline in Fallout Shelter.

This quest takes place in Vault 730, which is comprised of seven floors. Enemies include raiders and radroaches. The objective is on the third floor, where a raider first reveals that Paula Plumbkin went to a Nuka-Cola plant and then attacks the dwellers. The quest rewards are hidden in the room. The rest of the Vault is optional to explore, where its possible to find two more Nuka-Cola Quantum, as well as common weapons and outfits. 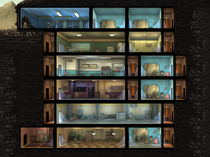 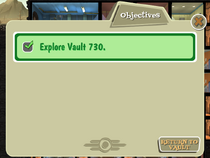 Other rewards
Add a photo to this gallery

Retrieved from "https://fallout.fandom.com/wiki/The_Path_of_Paula_Plumbkin?oldid=3487301"
Community content is available under CC-BY-SA unless otherwise noted.