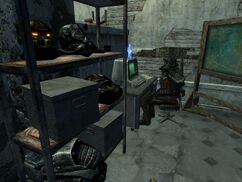 “If it isn't our local scavenger-for-hire. What've you found for us today?”— Protector Casdin, greeting the Lone Wanderer

The Outcast Collection Agent is an unmarked and repeatable quest in Fallout 3.

To start the quest, head to Fort Independence. If this is the Lone Wanderer's first time visiting Fort Independence, Defender Morgan will automatically initiate a conversation and alert them of incoming raiders, then two raiders will spawn just south of them. Once they are dealt with, she will speak to the Lone Wanderer again. When she finishes speaking, choose the dialogue option "Thanks for the help. Who are you?", or any other dialogue option except for "Shut up and get that fucking gun out of my face," as this option will cause Morgan to become hostile. Then select the options "Who are you people?" and "You collect technology? How do I sign up?" Protector Casdin will come after a few seconds, unlock the gate, and approach the player character. Speaking to Casdin before talking to Defender Morgan should be avoided since he will become aggressive as a result.

The player character is asked to trade certain pieces of technology, such as power armor, some energy weapons, sensor modules, and scrap metal to Protector Casdin. In return, he will give the player character their choice of ammunition, grenades, or medical supplies.

Once the Lone Wanderer has gained 50 "points" (see table below), they are told that they are considered friendly by the Outcasts. This allows for the infiltration of Fort Independence without encountering the hostility of the residents. Casdin also stops confiscating any Outcast power armor that the player character has.

A profit can be made from Casdin by reselling the items traded with him. Listed below are the items that the player character can receive, along with values.

In any one deal, one can receive an equal number of one of these: stimpaks, frag grenades, or RadAway. Or, one can receive a higher amount of 5.56mm rounds. For the items besides the aforementioned ammunition, the stimpaks and frags are worth more than the RadAway, therefore making stimpaks the most profitable.

If the items collected are in very good condition, almost none are profitable to "launder" through Casdin. The Barter skill doesn't matter here, because both the original item and the reward are usually subject to Barter, even though Casdin isn't. The only things that at least break even when at 100% repair are:

Conversely, if items are in poor condition, Casdin still gives his full reward. This makes them worthwhile. For example, if degraded to 25% of their full value:

The sensor module is always a bad deal, on a pure profit basis - one would be cashing in something worth 30, for something else worth 25 at best. But they can be accumulated earlier than the other items to meet the point requirement for admission into Fort Independence, in exchange for grenades or ammunition that exist in limited supplies at lower levels. Sensor modules are also an important component of bottlecap mines, which are probably the best early money makers from schematics, and deal 373 damage per mine.

If The Pitt is installed, trading for the 5.56 ammunition starts making sense, as the ammo press can convert the 5.56 into other ammunition types. Converting the 5.56 into 5mm at a 1:3 ratio makes it the most profitable (although long-winded) path. For example, converting a low quality laser rifle into 96 5.56mm ammunition with Casdin, then into 288 5mm ammunition at the ammo press will allow the player character to then sell them at about 0.6 bottlecaps per round (with middling Barter) or about 170 bottlecaps. As a poor condition laser rifle can be bought in some shops for about 50 bottlecaps, the rate of return is decent.

Some rudimentary mathematics can be done to see which items are best for getting into Fort Independence cheaply and/or early:

Sometimes Protector Casdin can be found dead. On the PC, this can be fixed by using the console commands: prid 42196, resurrect, moveto player [verified]

Retrieved from "https://fallout.fandom.com/wiki/The_Outcast_Collection_Agent?oldid=3465104"
Community content is available under CC-BY-SA unless otherwise noted.