The One is an undetonated C-23 Megaton nuclear bomb found slightly west-northwest of the Devil's Throat. It appears only by having the Wild Wasteland trait.

The bomb can be reached by going north-northeast from Ranger Station Bravo and is easily accessible if the player character fast travels directly to the Devil's Throat, then follows the canyon wall west. The bomb has a timer, which has been set to or is stuck at "9999."

Standing in close proximity to the bomb will result in between 1-3 rads per second of damage. Depending on the Courier's level, there will be up to four super mutant masters behind the bomb, next to a cave. There are also several glowing ones or feral ghoul roamers around the area. Without the trait, there is only a small blackened area of ground emitting a constant 1 rad per second.

The One appears only in Fallout: New Vegas. 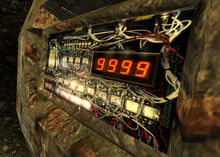 The countdown timer, set at 9999
Add a photo to this gallery
Retrieved from "https://fallout.fandom.com/wiki/The_One?oldid=3470724"
Community content is available under CC-BY-SA unless otherwise noted.