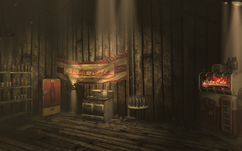 “But if you're super cool and find like enough bottles to fill my Nuka-Cola machine, 30 in all, I got a super secret cool prize for you!”— Sierra Petrovita to the Lone Wanderer

The Nuka-Cola Challenge is a side quest in Fallout 3 connected to the Nuka-Cola soft drink company and its prototype beverage, Nuka-Cola Quantum. It is also an Xbox 360 and PC achievement and a PlayStation 3 trophy.

To start this quest, find Sierra Petrovita at Girdershade, which is located northwest of Jocko's Pop & Gas stop and southwest of Smith Casey's garage.

Upon greeting the Lone Wanderer, she offers to give the "Nuka-Cola tour," which consists of viewing the large number of Nuka-Cola collectibles she owns. If the Lone Wanderer agrees to take the tour, she will show them around her home, discuss various Nuka-Cola facts and talk about some of the items in the room. The tour can be paused after each exhibit, as Sierra won't move unless the player moves more than the camera. After the tour, she gives the Lone Wanderer an ice cold Nuka-Cola. Immediately after the tour, she'll talk about the Nuka-Cola Quantum. With a rather easy Speech check, one can uncover that Sierra intends to give the Wanderer the schematics to the Nuka-grenade upon completing the challenge.

She then asks the Lone Wanderer to collect Nuka-Cola Quantums and says she will pay 40 caps for each bottle.

Waiting outside her house, Ronald Laren will ask the Lone Wanderer to instead give him the Nuka-Cola Quantums, as he hopes that giving them to Sierra will improve his chances of "plowing her bean field." He offers to pay the same price for the Quantums, though a successful Speech check will cause him to double the payment. However, by choosing him over Sierra, the Lone Wanderer will lose the chance for Schematics - Nuka grenade that would have been received from Sierra. With the Black Widow perk, a female Lone Wanderer has the option to offer a threesome in exchange for him finding the bottles, causing him to eagerly run off to his death. His body can then be found inside the main entrance of the Nuka-Cola plant, or somewhere on a more or less straight line from Girdershade to the plant if he happens to be killed on the way. If the Lone Wanderer escorts Ronald and he successfully reaches the Nuka-Cola plant, he will simply stand in the lobby. Leaving the area and re-entering will cause Ronald to die.

Nuka-Cola Quantums are rare items. There are only 94 loose in the base game (plus a 10% chance of finding one in a Nuka-Cola vending machine) and only a dozen or so more with add-ons. They are easy to see because they glow (only if HDR is enabled on the PC version). For a list of bottle locations, see Nuka-Cola Quantum.

Of course, the Quantum Chemist perk makes this whole task much easier, especially when in Sierra's house. She has a large amount of Nuka-Cola all over the place which could be stolen and automatically converted into Quantum, though this will gain negative Karma.

A good place to start looking is the Nuka-Cola plant. Aside from a few Quantums, a plant terminal entry can be found with shipping details for Quantum. The code for this terminal can be obtained from Milo by either passing a Speech check, killing him, obtaining an employee badge by finding the note Welcome to the Nuka-Cola family! or by using a dialogue choice accessible with the Robotics Expert perk. The code is used in the computer terminal in the room where Milo is found. After using the code, select the option to retrieve the shipping manifest.

The manifest details three locations where shipments of the Nuka-Cola Quantum were in the process of delivery: the shopping center at Paradise Falls, Super-Duper Mart and Old Olney grocery.

At the Super-Duper Mart, the shipment of Nuka-Cola Quantum can be found in the back storeroom near the fallen shelves next to the protectron. There are three of them. It is in the same room as the pharmacy supplies.

In Paradise Falls, five Quantums can be found in Eulogy's Pad underneath the stairs next to a bed. Stealing them does not cost Karma but getting caught will turn the whole town hostile.

Investigating Old Olney makes it clear the shipment of Quantum never made it there. The skeletal remains of the driver can be found on the steps outside a building in Old Olney along with the Nuka-Cola accident report. The note reveals that there was an accident and the driver abandoned the truck to look for help (which never came because the bombs fell). The truck with its Nuka-Cola Quantum can be found by exploring the highways surrounding the town. There are about 5 Quantums in the truck and about 28 regular Nuka-Colas. It is found about halfway between Old Olney and Chaste Acres Dairy Farm, southeast of a Red Rocket truck stop.

Just for the Taste of It (optional)

Main article: Just for the Taste of It

Just for the Taste of It is an optional unmarked quest available only before and during The Nuka-Cola Challenge.

Retrieved from "https://fallout.fandom.com/wiki/The_Nuka-Cola_Challenge?oldid=3428841"
Community content is available under CC-BY-SA unless otherwise noted.