You Gotta Shoot 'Em in the Head
Hired Help 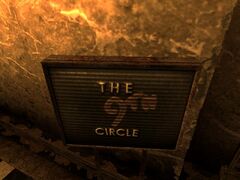 “Well now, lookee here. We got us a smoothskin that I ain't ever seen before. I'm Ahzrukhal, and this... this is the Ninth Circle. Folks got problems, and I got liquor to sell to 'em… well, liquor and a few other pick me ups. You need anything, you just let me know.”— Ahzrukhal

The Ninth Circle is a bar inside of Underworld Concourse which is in the Museum of History. The bar is owned by Ahzrukhal. It rivals Carol's Place in the Underworld.

The Ninth Circle is located on the upper level of the Underworld concourse. The bar consists of a few tables and chairs, along with the bar lined with stools. There is a radio on the bar table that plays GNR. If the player character turns it off, the other inhabitants will not turn it back on. Behind the bar are two shelves of alcohol along with plates and utensils, and a fridge to the left of the shelves.

Ahzrukhal stands behind the bar initially selling alcohol, but he will also sell chems if asked. There is another bar counter to the right of the two shelves, on which sits Ahzrukhal's terminal. Ahzrukhal's employee, Charon, stands in the southeastern corner of the bar.

The Ninth Circle appears only in Fallout 3.

The Ninth Circle is a reference to Dante's The Divine Comedy. The first canticle is Inferno, or Hell, which contains nine "circles," each populated by a specific type of sinner. The Ninth Circle is the lowest, and final, the circle of treachery and betrayal.