The Mysterious Stranger is a paper note in Fallout 4.

It can be found under a bed on the first floor of the Valentine Detective Agency, next to a hot plate and ammo can, in Diamond City.

Sightings of a man dubbed "The Mysterious Stranger" have been popping up sporadically across the old U.S. for years now.

All anyone knows is his MO: appearing suddenly, killing without remorse, disappearing without a word. "The Stranger" has no known accomplices, no clear method for selecting his targets, no calling cards left behind.

Sightings range from the NCR all the way to the East Coast, stretching back decades. Now he's come to the Commonwealth.

Last thing this place needs is another psychopath running amok. Time to start putting together the pieces to put this one away.

DESCRIPTION
Human male. Outfits vary, but most recent sightings describe a large overcoat and fedora (guy has taste, I'll give him that much).

One man? Multiple men? A Ghoul with minimal scarring? Might explain the long passages of time between sightings.

(Perps like this make me wish the Institute had sprung for thermal detection before giving me the boot.)

The note under the bed in Valentine Detective Agency 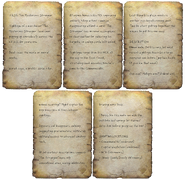