The Moon Comes Over the Tower 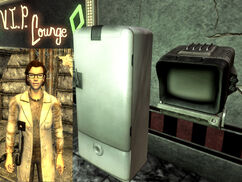 Plant the network bug and return to Emily

“Excuse me, but... are you the courier who caused all of that trouble in The Tops?”— Emily Ortal

The Moon Comes Over the Tower is a side quest in Fallout: New Vegas.

"When the Moon Comes over the Mountain" was a popular song published in 1931 and written by Howard Johnson, Harry M. Woods, and Kate Smith.

Retrieved from "https://fallout.fandom.com/wiki/The_Moon_Comes_Over_the_Tower?oldid=3499321"
Community content is available under CC-BY-SA unless otherwise noted.