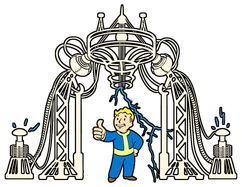 The Molecular Level is a main story quest and achievement/trophy in Fallout 4.

Before the Sole Survivor can utilize the newly acquired courser chip, it needs to be analyzed by someone familiar with the Institute's technology. The best person for the job happens to be Tinker Tom of the Railroad. If the Railroad has yet to be encountered, follow the Road to Freedom to find the hidden Railroad HQ.

Return to Virgil. He will offer the plans for the teleporter in exchange for a favor: if the teleporter works, the Survivor must retrieve a serum from Virgil's old laboratory inside the Institute to cure his FEV affliction and make him human again. Accept his terms and receive the plans. However, the teleporter is no simple machine: expert help and a lot of resources will be needed to construct it.

At this point, the Sole Survivor needs to make a choice to enlist the help of one of the three major factions (the Minutemen, the Brotherhood of Steel, or the Railroad). Speak to either Proctor Ingram (BoS), Sturges (Minutemen), or Tinker Tom (Railroad) and arrange for the construction of the teleporter. The chosen expert will travel to the building site and explain the requirements and necessary materials for each of the four components: the reflector platform, beam emitter, control console and relay dish.

If the player character chose to ally with the Brotherhood, the teleporter can be built at Boston Airport or any other owned settlement, excluding Home Plate and settlements from add-ons. Even though the Railroad suggests building it at Mercer Safehouse, it is not required to do so.

If building with the Brotherhood's help, Elder Maxson's permission is required before activating the signal interceptor. He will run from Boston Airport to the chosen settlement. Maxson might camp at allied settlements for the night along the way (he will be tagged on the Pip-Boy for his entire journey). The easiest option is to wait/sleep for about eight hours for him to appear at the settlement or simply build at Boston Airport if using the Brotherhood for help.

Requirements for the teleporter:

In order to craft all the items at once the total quantity of each component is as follows:

When everything is built, linked together and supplied with enough power, the teleporter is ready for use. Talk to the expert and get ready for the voyage. The expert (of the assisting ally faction) will instruct the Sole Survivor to step on the platform and the teleportation process will commence.

Retrieved from "https://fallout.fandom.com/wiki/The_Molecular_Level?oldid=3416408"
Community content is available under CC-BY-SA unless otherwise noted.