Fallout 76
“Known as the "Mire" by survivors of Appalachia, this swampy region is home to twisting vines, large tree canopies, and tall grass. All easy places for things to hide...”— Fallout 76 loading screens

The Mire is one of the six regions of Appalachia.

The Mire was once a remote, rural region of Appalachia east of the Savage Divide, home to the Free States movement sparked by Raleigh Clay. Suspicious of the government's vault program and aware of the escalation of the war, the group built private concrete bunkers scattered throughout the region, using nearby Harpers Ferry as a staging area and supply point.[1][2] The movement's conspiracy theories and ideals unnerved patriotic visitors and disrupted the small town's tourism.[3]

Violence between the Free States and law enforcement drew the attention of the government.[4][5] In June 2077, the public prosecutor pressed charges against the movement's founder,[6][7] and, by November, the Free States openly seceded from the United States and retreated to their concrete bunkers.[8][9]

After the Great War, the Mire's forest and swamp environment began to mutate and grow deadly with each passing day.[10] Exactly one year after the Great War, Vault 94 opened its vault door and sent ambassadors into the wasteland to invite survivors back to the vault.[11] In November 2078, an ambassador reached the town of Harpers Ferry. After hearing about the Vault, Mayor Miranda Vox sent a group of survivors led by Cole to investigate the ambassador's claims.[12][13] Certain that the dwellers' hospitality was a trap, the group massacred the vault's leaders and attacked the vault's G.E.C.K. unit, triggering a massive nuclear explosion.[14][15][16] A thick fog poured from the vault's entrance, rapidly intensifying the area's swampy environment and mutating the region's thick foliage.[12][17][18][19] The Savage Divide acted as a natural barrier, preventing the Mire's expansion to the west.[20]

In 2079, Raleigh Clay gave the all-clear signal to Free States members and was contacted by Miranda Vox, with Harpers Ferry being in desperate need of assistance.[21][22] Despite previous conflicts, the movement agreed to provide aid.[19] Later in the year, a group of Free States members secured the Thunder Mountain Power Plant, but were assaulted by Taggerdy's Thunder and chose to surrender the complex to them.[23]

In 2096, Harpers Ferry was attacked by Scorched and the Free States retreated back into their bunkers throughout the Mire, banning all efforts to recover or save what remained of the town or its inhabitants .[29]

The Mire is a dark, swampy region home to twisting vines, large tree canopies, and tall grass. Mutated strangler vines infest the region controlled by strangler hearts, infecting living things and displacing inanimate objects.[30] The thick foliage gives cover to the region's mutated creatures and makes the area one of the darkest at night. While radiation from the Great War attributed to mutations, the region's red-hued environment is largely due to the explosion of Vault 94's G.E.C.K.[18][31]

The Mire's weather is primarily misty, though the region may occasionally suffer from highly-radioactive radstorms.[32] The weather has a 55% chance to be misty, 15% to be misty and rainy, 15% to be foggy, 15% to be clear, and 3% to be a radstorm.[33]

The Mire is in the northeastern portion of the Appalachia map. Locations within the region include:

“What hellish secrets lie in the dark, forested swamps of this northeastern region? A great many, including a variety of monstrous cryptids—mutated creatures that beggar belief and attack with an animalistic ferocity! In fact, even the more static wildlife has a mind of its own; radiation fallout seems to have caused a shocking growth spurt among the sycamores, maples, and mulberries that populate this region; long, snaking tendrils wrap around and choke anything in their path, be it vehicles, rail carriages, and, shockingly, even an entire town, in the case of Tanagra! Aside from hunting Gulpers, stalking giant Sloths, and wondering just what the hell went on in Braxson’s Quality Medical Supplies, what else is there to do? Well, expect several hidden survivalist bunkers, some with more secrets than others. It’s also wise to look up; enterprising (but now deceased) folks have spent considerable time elevating their dwellings from the swamp effluent, and you may chance upon a variety of treehouses, some with platforms higher than you may be comfortable climbing!”— Fallout 76 Vault Dweller's Survival Guide p.452
“Known as the “Mire” by the survivors of Appalachia, this swampy region is home to twisting vines, large tree canopies, and tall grass. All easy places for things to hide...Tread deeper into the dark swamp, and you may find mutated plants known as “strangler vines” that infest the Mire. They attach to living things, notably the large trees in the area. The Mire is also home to the Dyer Chemical plant, which originally produced animal feed and other phosphates used for nearby farms. Another place to check for signs of life is Harpers Ferry, a small town that depended on tourism: This put them at odds with the growing “Free States” movement, whose conspiracy theories put off patriotic visitors. Don’t leave the Mire without visiting the Survival Training Center, a survival skills training facility, open to tourists who want to learn how to rough it out in the wilderness. Hopefully, those lessons came in handy.”— Fallout 76 Vault Dweller's Survival Guide

The Mire appears only in Fallout 76.

The Mire is referred to as "the Swamp Forest" in a quest log for Tracking Unknowns and in the scouting report at Sunnytop Ski Lanes, while several events and quests in the Mire have "SF" at the beginning of their editor IDs. 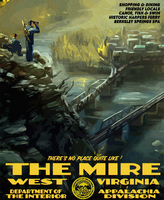 Night time in the Mire

Sunny day in the Mire