Before the Great War, the location was a metal foundry in Pittsburgh, consisting of furnaces and presses used for processing molten metal. After the war, the facility is a part of the Pitt. Slaves produce metal products under the watch of raiders.

The ammo press is mentioned by Ashur as to how he has kept his army intact and with ammunition all these years.[1] It is located between downtown, uptown, and the steelyard. The steel mill also contains the Hole.

The Mill appears only in the Fallout 3 add-on The Pitt. 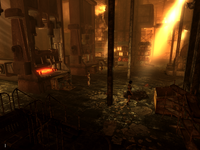 Above the Hole view 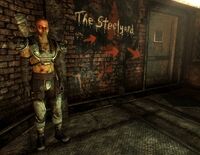 Everett's door to the steelyard

Local map around the outside