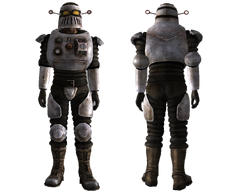 The Mechanist's costume and the matching The Mechanist's helmet are pieces of Fallout 3 armor worn by the eponymous self-proclaimed superhero, the Mechanist, who is hiding out in the robot repair center south of Canterbury Commons in the Capital Wasteland.

The Mechanist's armor is inspired by robots, with greaves and armor heavily resembling a robot's body, and the helmet having two antennae sticking out. It gives a decent DR of 20 and gives a +1 bonus to Endurance, although it's fairly heavy at 15 lbs and gives a penalty of -1 Charisma.

The armor can be obtained either by killing the Mechanist or persuading him to give up his career.

Should the player character be asked by Uncle Roe to solve the town's "superhero" problem, the Mechanist's costume can be handed over to the AntAgonizer to end the town's problems. Alternatively, wearing the costume in the AntAgonizer's presence will turn her hostile.