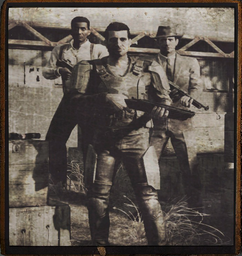 The Marowski Heist is a side quest in Fallout 4.

In order to obtain this quest, the Sole Survivor must have made certain decisions during Diamond City Blues. One method of obtaining this quest is if Paul was killed in Diamond City prior to leaving for the encounter with Trish. Alternatively, Paul can be brought to the chem deal and killed by Trish and her triggermen. A third option is to choose to completely stay out of the entire plot by refusing to help Paul at the start. If Paul survives Diamond City Blues but is killed later (i.e. killing him at the request of Malcom Latimer), this quest will not appear.

The Sole Survivor will be approached by Darcy Pembroke a day later, who is investigating the disappearance of Paul. When she asks the Sole Survivor about it, they must tell her that they will help with the investigation or inform her of Paul's death without implicating themselves (if he was in the heist). Then, after a while (about a week) speak to Darcy again to obtain the photo and start this quest.

Due to the complicated nature of triggering this quest, it was not expected to start the quest when Paul lives. So to allow this in such a situation, one can enter Resetquest 457c6 then SetStage 457c6 100 in the console to start the quest (this will cause the quest to appear in your quest log). Then enter player.additem 0008a1fb 1 to get the photo in the Sole Survivor's inventory and the quest can go on.

While in Diamond City after completing Diamond City Blues, Darcy gives the Sole Survivor the Marowski Heist photo. One can either show it to Marowski to tip him off that Malcom Latimer stole from him, or show it to Latimer to blackmail him.

Once the quest has been completed, one can return to Darcy in Diamond City and choose whether to split the caps earned from the quest with her.

Retrieved from "https://fallout.fandom.com/wiki/The_Marowski_Heist?oldid=3416862"
Community content is available under CC-BY-SA unless otherwise noted.
... more about "The Marowski Heist"
RDF feed
Has platform
PC +, Playstation 4 +  and Xbox One +