“Another human with a death wish... Welcome to the Mall, tourist.”— Willow, to the Lone Wanderer

The Mall is a location in Washington, D.C.

The Mall is a bombed-out war zone occupied by super mutants. The well-maintained public park has been replaced by a network of trenches, fences, and bunkers in fortified positions where the super mutants are located. Crossing this part of the Mall will involve enduring firefights unless sneaking around the outsides, but the underground metro stations on either side of this zone bypass the conflict.

The outside of Underworld is patrolled by Willow, who, despite her claims that super mutants leave ghouls alone, will be shot at by nearby super mutants. Slavers occupy the Lincoln Memorial. Approaching the memorial, the player character will be stopped and taken to their leader, Leroy Walker, which starts the Head of State quest.

The Brotherhood of Steel holds a defensive position around the Washington Monument in the center of the Mall, and Talon Company is taking the offense against super mutants to the west toward The Capitol Building.

The water found between the Washington Monument and the Lincoln Memorial, is full of wrecked cars and shopping carts. Its radiation is strong enough to reach a few feet away from the water. It has the second-largest concentration of super mutants in the Capital Wasteland, the first being Vault 87.

Many of the super mutants in the Mall do not respawn so it is possible to make the area relatively clear of enemies.

The Mall appears in Fallout 3 and in the Atomic Command game in Fallout 4.

The Mall is based on the real world location of the National Mall, near the downtown area of Washington, D.C.. 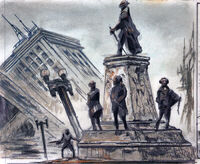 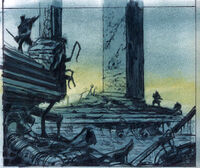 Aerial view of the Mall

Duck and Cover! in the super mutant bunker