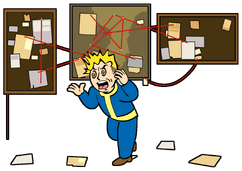 The Lowe-Down is a quest in the Fallout 76 update Wild Appalachia.

Travel to Lewisburg and find patrol car on the eastern side of town. Listen to Klein's notes, part 1 which can be found in a duffle bag in that car.

Find the "house with a flamingo in the front" just northeast of the patrol car. Investigate behind the house to find the following:

The 'Further instructions' note references the note 'From mom' which is found in the basement of Van Lowe Taxidermy. Travel back there.

Set the washing machine cycle to "Delicates" and set the dryer heat level to "Low Heat'. Interact with the day marked "Laundry Day" on the wall calendar near the machines and the wall of the basement will open to reveal the entrance to Calvin van Lowe's secret laboratory.

Investigate the laboratory to find the following clues:

Then take the assembly password, which is in a tool chest near a tinker's workbench. This will unlock the assembly platform terminal.

Access the assembly platform terminal and access the "Session 4: Assaultron [SN:RX-0022CF9]" entry to retrieve the behavioral reprogramming holotape. Listen to it.

Access the assembly platform again and access the "!!! - EMERGENCY CHECK-IN !!!" entry. Downloading the coordinates to Garrahan Estate will complete the quest and begin Wolf in Sheep's Clothing.

Bo-Peep's monitoring station, where the spare operative keycard and further instructions note can be found

Officers' patrol car
Add a photo to this gallery
Retrieved from "https://fallout.fandom.com/wiki/The_Lowe-Down?oldid=3405447"
Community content is available under CC-BY-SA unless otherwise noted.