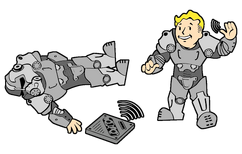 “The last squad went in three years ago. They never reported back. Officially, they're missing, presumed dead.”— Danse

The Lost Patrol is a Brotherhood of Steel side quest in Fallout 4.

This quest can be initiated in one of three ways. The Sole Survivor can be given The Lost Patrol by speaking to Paladin Danse or Lancer Captain Kells after completing Call to Arms but before triggering Shadow of Steel. Alternatively, the Pip-Boy may detect one of the emergency distress beacons while exploring, automatically activating the quest.

However the quest is acquired, the Sole Survivor will need to trace the sources of three distress signals. Each beacon leads to the final resting place of a Brotherhood of Steel soldier, revealing the fate of their reconnaissance team. To complete the objective, the Survivor must loot holotapes from the fallen soldiers, then play them from their Pip-Boy.

Knight Astlin can be found behind a table in the recruitment office inside the National Guard training yard.

Scribe Faris is found at the Revere satellite array. He is in a metal and wood structure above the ground connected to the southeast array tower. This area is inhabited by super mutants.

Once all three holotapes have been played a quest marker will appear at Recon bunker Theta. Once there, the Sole Survivor will be accosted by Paladin Brandis. If the Survivor tells him the fate of his officers he will allow them to loot the items in his home, which includes a fusion core. Otherwise he will initiate combat.

If the Sole Survivor is a member of the Brotherhood of Steel they can attempt to convince Brandis to return to the order through three conversation checks ranging from easy to hard difficulty. If successful, Brandis will later meet them aboard the Prydwen where he will reward them with the Survivor's Special.

To complete the quest, the Sole Survivor must report to Paladin Danse or Captain Kells if the quest Shadow of Steel has been started and the Prydwen entered the Commonwealth.

The name of this quest is a reference to the 1934 film, The Lost Patrol, where a small British patrol led by a sergeant retreats north after a failed mission. One after another the members of the patrol are killed until only the sergeant remains. When a second British patrol finally finds the sergeant, he is heavily traumatized after surviving for so long on his own.

Add an image to this gallery
Retrieved from "https://fallout.fandom.com/wiki/The_Lost_Patrol?oldid=3103491"
Community content is available under CC-BY-SA unless otherwise noted.