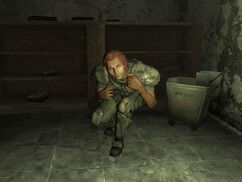 “Oh, thank God. Paladin Hoss sent you, didn't he? I knew he wouldn't leave me behind. When they attacked, we were cut off so quickly. My gun jammed and I never even got a shot off. I couldn't do anything but hide.”— Initiate Pek

The Lost Initiate is an unmarked quest in Fallout 3.

Paladin Hoss will inform the Lone Wanderer that Pek has barricaded himself inside a janitor's closet towards the back of the first floor, and request their assistance in reaching the office building where Pek is located. Once complete, the player character is asked to storm the building and rescue Pek, who is cowering in a corner due to a jammed gun. With sufficient Small Guns or Repair skills, Pek's gun can be fixed; regardless of weapon status, Pek will follow the Wanderer until they exit the building and regroup outside with Paladin Hoss.

Retrieved from "https://fallout.fandom.com/wiki/The_Lost_Initiate?oldid=3429032"
Community content is available under CC-BY-SA unless otherwise noted.
... more about "The Lost Initiate"
RDF feed
Has platform
PC +, Xbox 360 +  and Playstation 3 +