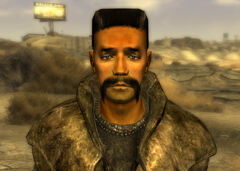 The Drifter without his hat

“My story's a long one, friend, and I can't say it's all that interesting.”

The Lonesome Drifter is a solitary singer and guitar player camped out north of El Dorado Gas & Service in Fallout: New Vegas.

The Lonesome Drifter was born in 2253[1] in a small town in Montana.[2] His childhood was marred by the sudden departure of his father, a real "mysterious feller" even while he was with his mother.[3][4] As a result, his mother was forced to work her fingers to the bone in order to provide for the family as the Drifter mastered the guitar. However, she eventually buckled under the burden. To help her, the Drifter found work in Montana's coal mines at fifteen and worked the black seams until his mother passed away after a life of hardship.[5][6] Angry and frustrated, the Drifter packed his guitar and the Mysterious Magnum, the only mementos of his father, and took to the road to find him and get some answers.[7][8][9]

For years he traveled the wasteland, not knowing what he would do if he found him. Ask questions? Punch his clock out?[10][11] He did not succeed in his search, but found numerous audiences for his singing talents across the wasteland, including the Dead Horses at Zion Canyon, where his singing charmed a young tribesman.[12] By 2281, however, he started to tire of the nomadic lifestyle, realizing that his quest will likely end in failure. Camping out on the shores of the El Dorado Dry Lake, the Drifter is pondering his options and getting ready to settle down.[13]

* Added to his inventory after giving Tommy Torini's business card to the drifter in Talent Pool.

The Lonesome Drifter appears in Fallout: New Vegas and is mentioned in the add-on Honest Hearts.

Joshua Sawyer stated in a forum post that he wishes they had time to hard code the Mysterious Stranger to turn on the player character if attempting to use V.A.T.S to kill the Lonesome Drifter.[14]

The Lonesome Drifter with his acoustic guitar