June 30, 2020
“From the makers of Unstoppables Shindig, Blast Radius, and Catch the Commie comes The Legendary Run- a new way to experience irradiated West Virginia. Each season brings a new progression of challenges to complete, plus exclusive rewards like Atom Bundles, Perk Card packs, and unique cosmetics.”— fallout.bethesda.net

The Legendary Run is the fourth major update for Fallout 76. It introduced seasons and legendary perks, among other features. The update started out introducing the first-ever season in Fallout 76. Alongside this, Public Teams were also introduced, allowing players to team up quickly for varying benefits depending on the team's goal. It follows Wastelanders and was followed by One Wasteland For All.

A man named Russell Dorsey decided to volunteer for the Brotherhood's arrival in Appalachia, which culminated in a joint effort. Also, a settler going by the name of Maggie Williams, while trying to find closure, had no idea what horrors her allies would unleash while trying to help her.

The Legendary Run season ran alongside the update, the first season released in Fallout 76, which ran from June 30 - September 8, 2020.

The progression through the season was represented as pieces on the game board, playing as Captain Cosmos, racing the evil Dr. Zorbo across the galaxy. Throughout the season, one must complete challenges to progress, with the aim of beating Dr. Zorbo to the finish line.

These quests are displayed under "Miscellaneous" in the "SIDE" section of the Pip-Boy and start other side quests. 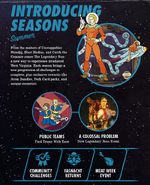 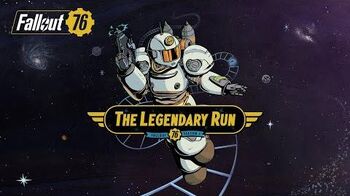