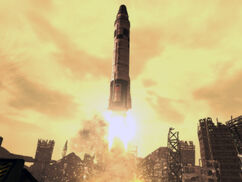 Condemned to Repeat It

Decided the fate of all the Divide dwellers

“At the end of the High Road lies Ashton - its silo. That machine with you, it can open it, wake it up, like it did the one in Hopeville.”— Ulysses

The Launch is a main quest in the Fallout: New Vegas add-on Lonesome Road.

After emerging from the collapsed overpass tunnel, the Courier will find themselves on the High Road, where they are contacted by Ulysses and given their next task.

There are two collapsed buildings farther up the road and a nuclear warhead which must be detonated in order to pass; doing so will also kill a marked man in the collapsed building. If the player character climbs this building, they will find the Crow's Nest.

Continuing past the Crow's nest, four deathclaws will be on the high road near the ruined highway interchange. The first will jump on the roof of the trailer when the player character enters it. The second is up the road a bit. Another nuclear warhead is located here on top of a truck - the third deathclaw is visible once this is detonated. The fourth is hiding behind a large rectangular container.

The high road ends past the next bend and there is a small road going off to the left which the Courier must take. The Junction 7 rest stop is located to the right of the high road at the end. If the player character takes the road down to the rest stop, the deathclaws may respawn on the overpass.

Follow the small road right to the end where the Ashton silo control station is located. Activate the console after ED-E has tinkered with it to trigger another audio log from Whitley, completing the quest.

Retrieved from "https://fallout.fandom.com/wiki/The_Launch?oldid=3467762"
Community content is available under CC-BY-SA unless otherwise noted.