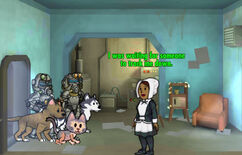 “We've followed the Gobbler's trail of cranberry sauce to Vault 261. Now it's time to end this!”

The Last Gobble! is an overseer quest and part of the No Thanks for the Gobbler! multi-stage questline in Fallout Shelter.

This quest takes place Vault 261, it has four levels and a random layout. A woman in a pilgrim outfit named Doctor Doting will give three dialogue options. The first option yields a laser pistol, the second a Toyger pet cat, while the third gives a sturdy merc gear. The room the doctor is in contains a random piece of rare junk.

Rewards
Add a photo to this gallery
Retrieved from "https://fallout.fandom.com/wiki/The_Last_Gobble!?oldid=3282087"
Community content is available under CC-BY-SA unless otherwise noted.