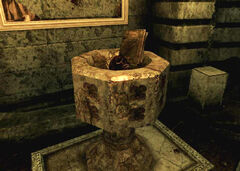 The book in the ritual site
“There is... one way to utterly destroy the Krivbeknih, but you must take a pilgrimage, far north of Point Lookout, in the Capital Wasteland. Seek a place called Dunwich. Within is an obelisk, itself a wicked thing. It'll consume the book - you need only press the book to its surface. May God shed his blessings upon you, child. Make haste for Dunwich.”— Marcella, on how to destroy the Krivbeknih

The Krivbeknih is a strange artifact in the Fallout 3 add-on Point Lookout.

Said to possess a dark power, the Krivbeknih was mentioned to have been owned long ago by Constance Blackhall until it went missing. The swampfolk now possess it, and use it in their rituals. This book is the one that Jaime Palabras' father was searching for, as mentioned in the personal journal holotapes found throughout the Dunwich Building.

The Krivbeknih is a large brown book with a bloody gash across the front of it. Due to its disturbing nature, Marcella wants the book destroyed, but Obadiah Blackhall wants the book returned to him, as the rightful owner. It seems that the book really possesses dark and mystical otherworldly powers as a strange event unravels when pressed against the Obelisk in the Dunwich Building. Furthermore, upon taking the Krivbeknih from the ritual site, objects on the table behind it will start to shake and fall off the table.

The Krivbeknih is found in the deepest level of the ritual site, in a bowl full of blood on a stone altar.