The Institute is a location in the Commonwealth in 2287.

The hidden headquarters of the organization known as the Institute, located deep underground. The Institute was built upon what was once known as the Commonwealth Institute of Technology, or C.I.T.[1] While the college itself laid in ruins for more than two centuries, at the time of the Great War, those present took refuge underground.[1]

The Institute was formally founded by the children of the original survivors, who dug into the earth and built increasingly sophisticated residential facilities and laboratories, starting an ongoing process of infrastructure expansion.[2]

Due to the absence of sunlight, the Institute is perpetually illuminated by artificial means. A quiet time running from 10 p.m. to 6 a.m. has been instated for the well-being of the Institute citizens.[3] The Institute has its own day and night cycle system, as the window lights on the ceiling will close when it is considered night. The shutters also have holes or small lights in them which mimic stars.

A small lab area with multiple work stations and a firing range used to test new weaponry. Contains the entrance to the reactor room. Weapons are developed, tested, and innovated upon here to arm synth foot soldiers and coursers. This is also where they created the experimental synth relay grenades, which will automatically teleport in multiple synths to fight for the player character where thrown. Madison Li and Evan Watson, who begins the quest Appropriation, can be found here. Young Shaun can be found here following the first meeting with Father.

One of the larger labs, BioScience is filled with plants and even some synthetic gorillas. There is a series of connected labs that have been closed off and abandoned. The quest Building a Better Crop can be found here from Isaac Karlin, and also Hypothesis can be started with Clayton Holdren.

The concourse is a large cylindrical-shaped subterranean structure with four floors. Hallways wrap the outskirts of the cylinder leaving the middle section open for a large atrium of trees and fountains, with a helix-shaped elevator going to the surface levels where the teleporter is located. All four divisions of the Institute are located along the perimeter of the concourse, as well as residential areas and both vendors.

The FEV lab is the source of the majority of super mutants found in the Commonwealth.[4] Many years of experimentation with the Forced Evolutionary Virus took place here. To access the lab one must either hack a Master level terminal in the main BioScience lab which provides direct access to the FEV lab. Or, pick a Novice locked door in the back hallways of the BioScience division. The serum that Virgil asks to retrieve to cure his mutation is found here as well as the holotape "Brian Virgil personal log 0176."

The sealed off, dilapidated section of the facility, only accessed when progressing through the quest The Nuclear Option. It's inhabited by many hostile synths and four laser turrets, which can be deactivated using a terminal. On the main floor, there is a sentry bot which can be activated with the robotics terminal. It will fight the synths that are on the assembly floor, but will also be hostile to the player character. The exit is through a circular hatch in the back of the main assembly floor, which will lead to the BioScience division.

This area is accessed from an underwater pipe due south of Ticonderoga, which leads into a small flooded underground room. There is a terminal-locked security gate in the northeast corner, leading to a small area containing a steamer trunk with leveled loot.

The reactor room is only accessible through the Advanced Systems division after completing the quest Mass Fusion for the Institute or in The Nuclear Option quest for the Brotherhood of Steel, Minutemen or Railroad. Upon entering, there is a long sloped hallway that leads to a larger room with the reactor in the middle, accessible by a catwalk. Depending on which faction the Sole Survivor chooses there will be a change in the events that take place here.

Robotics is the smallest of the four labs by accessible areas, consisting of a single large room containing the Institute's synth assembler. A constant stream of synths are being produced here, being assembled in a pool in the middle before climbing out and walking through into the inaccessible processing section.

A very small area is accessible only by an elevator in the main atrium. It contains a storage room and heavy construction equipment being used to expand the Institute's infrastructure.

Loot will become unavailable if banished from the Institute, or after completing The Nuclear Option for any of the three factions. See section articles linked below for list of items.

The Institute appears in Fallout 4. The location is mentioned several times in Fallout 3 and in Mr. House's obituary in Fallout: New Vegas.

Memorial to Father after his death 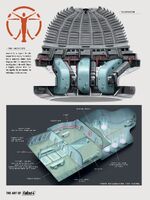 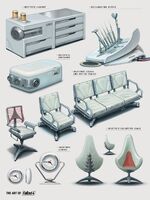 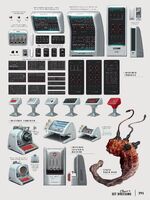 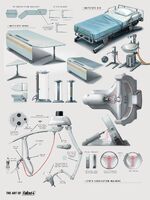