The House Always Wins I 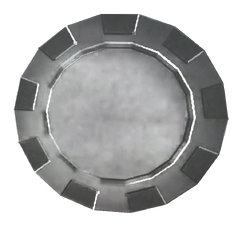 The House Always Wins I

“Such a small thing, isn't it? And yet so... capacious. So very dear..”— Mr. House about the platinum chip

The House Always Wins is an eight-part main quest in Fallout: New Vegas.

Mr. House has big plans for his Strip and he needs a proper army to enforce them. To this end, he wants the platinum chip to upgrade his securitrons on the Strip. Mr. House tasks the Courier to retrieve the platinum chip from Benny, and use it at the Fort to upgrade the securitrons, then bring it back to the Lucky 38 so that Mr. House can upgrade them, although it is possible to do it the other way around.

The Courier must retrieve the platinum chip from Benny and bring it back to Mr. House so he can upgrade his robotic army. This quest will complete upon delivery of the chip, but Part Two may need to be completed first depending on the player character's actions. Note that the following options can be done without actually speaking to Mr. House, since it ties in with Ring-a-Ding-Ding!

One way to deal with Benny is by telling his right-hand man, Swank (located at the front desk), about Benny's planned rebellion. Swank is initially suspicious of the Courier's accusations, but the player character can convince him using one of two ways:

Once Swank is convinced that the Courier may be right, he will return one's weapons and tell the Courier to go up to Benny's suite to search for additional evidence. Once obtained and shown to Swank, he will help the player character eliminate Benny. After talking to Swank and receiving One's weapons back, killing Benny will reap a positive Karma bonus and no retaliation from the remaining gamblers and bodyguards in Vegas. Doing so also completes the quest Ring-a-Ding-Ding!

An alternative option instead of speaking with Swank is to talk straight to Benny, who is waiting near the Presidential Suite with his personal guard. He will offer the Courier a key to the room after taking the peaceful speech route. Benny will prefer to meet the Courier with his bodyguards, but one can convince him through a 60 Speech check to leave them outside. Once the player character and Benny are in the Presidential Suite, one can:

If the Courier agrees to talk in private and head to the Presidential Suite by yourself, Benny will let you know over the intercom that he has duped the player character. He sends up 4 guards to attack the Courier, but with a speech check of 35 and 50 one can convince him that they will stop chasing him. In either case, Benny will run off to the Fort and will be captured by Caesar's Legion.

With the Black Widow perk, a female Courier can seduce Benny and get into his suite without any trouble. One can choose to attack him as soon as one gets into his suite, or they can have sex with him and then kill him in his sleep. Either way, the quest proceeds as above. the Courier can also have sex with him and then just fall asleep, in which case Benny will be gone in the morning and will have left a note. Benny will then be captured by Caesar's Legion, forcing the player character to go to the Fort to retrieve the platinum chip.

Upon killing or rescuing Benny and having obtained the chip, one can return to Mr. House and watch his Securitron demonstration in the basement. One will never come back to this location, so take what little loot is in the room. Now the Courier has finally fulfilled their contract!

If the Courier failed to kill Benny, then they must complete Part Two, which will complete this quest at the same time.

Retrieved from "https://fallout.fandom.com/wiki/The_House_Always_Wins_I?oldid=3217712"
Community content is available under CC-BY-SA unless otherwise noted.