The Hole (The Pitt)

The Mill (the Pitt)

The Pitt
“What's to tell? Most die. One or two have made it out, but that's about it.”— Faydra

The Hole or the Arena is a location within the Pitt. It is an area where fights between slaves and other combatants take place.

The Lone Wanderer enters the Hole after starting the second half of the quest Unsafe Working Conditions. The fights are organized into three rounds where they must battle against three slaves, then two brothers and then the Hole's current champion, Gruber.[1][2] As soon as a fight begins, radioactive barrels are dropped into the arena. They act as obstacles and give off high amounts of radiation. Once the fight is over, the Lone Wanderer can loot the bodies before exiting via the same door used to enter.

Contestants are allowed to bring any weapons and items they have for the fight, and may not leave until the fight is over. Faydra offers equipment via nearby lockers before the fight begins. At the end of each round, Faydra will clear the participant's radiation. A water fountain next to Faydra can be used to restore HP. After completing the fights, one's full inventory can be retrieved from a footlocker outside the Hole.

The Hole appears only in the Fallout 3 add-on The Pitt. 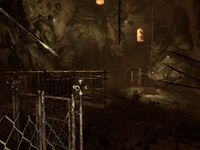 Concept art for the arena by Adam Adamowicz