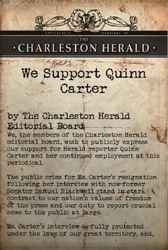 The Herald supports Quinn Carter is a paper note in Fallout 76.

The public cries for Ms. Carter's resignation following her interview with now former Senator Samuel Blackwell stand in stark contrast to our nation's values of freedom of the press and our duty to report crucial news to the public at large.

Ms. Carter's interview is fully protected under the laws of our great territory, and, as such, is under no obligation to reveal the location of Senator Blackwell, regardless of the nature of the statements he made during said interview.

Thus, we see no reason to offer any less than our total support of Ms. Carter.

Add an image to this gallery
Retrieved from "https://fallout.fandom.com/wiki/The_Herald_supports_Quinn_Carter?oldid=3178733"
Community content is available under CC-BY-SA unless otherwise noted.