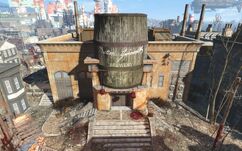 “Give a Man... a Taste of Freedom!”— The Gwinnett Restaurant's slogan

The Gwinnett Restaurant is a super mutant encampment in neighborhood of South Boston in 2287.

This front-of-house restaurant once allowed beer aficionados to sample such fine products of the nearby Gwinnett Brewery as Gwinnett's Pale Ale, Peabody Pilsner, Dead Redcoat Ale and the infamous Bunker Hill Brew.[1] The building itself, however, had major damage; a hole large enough to stand in was open between the kitchen and its on-site Craft and Seasonal brewery. The company hired contractors to come and repair the wall during the first week of November 2077. Until then, the host staff was instructed those guiding tours of the paired facility to require all patrons to wear head protection until repairs were complete.[2][3][4][5]

When the Great War struck, survivors stumbled into the restaurant. A few weeks later, looters attacked the building for any and all supplies, while the survivors fled into the Gwinnett Brewery. Melissa locked herself in the closet of the restaurant and a male survivor barred himself in the brewery rooftop computer room.[6] As of 2287, the place is piled high with offal and stands half-demolished by super mutants.[1]

A broken water pipe leads between the Gwinnett Brewery and the restaurant. Entering through the main entrance, there are two can chimes and a monkey alarm. Enemies present include a mutant hound, five super mutants of various levels, and a few mirelurks located in the craft wing. Upon entering, if the player character waits long enough, they will be able to hear them begin to fight each other.

From the lobby, the staircase to the right leads to the bar with one mutant, the staircase directly ahead leads up to a two-tiered dining area, and the staircase to the left leads down to a lower dining room where three mutants and the hound are initially located. Behind the bar is a large window looking into the craft wing area with a super mutant and a locked door that separates the two areas.

The lower level of the craft wing contains the water pipe that is mentioned in the terminal. This pipe can be taken directly to the main brewery and contains a leveled mirelurk. The area adjacent to the lower dining room, and directly below the upper dining area is a bathroom. The kitchen can be accessed from the bathroom as well. It contains a large amount of flammable gas, as well as a hole in the wall leading directly to the lower level of the craft wing.

The Gwinnett restaurant appears only in Fallout 4.

Retrieved from "https://fallout.fandom.com/wiki/The_Gwinnett_Restaurant?oldid=3450445"
Community content is available under CC-BY-SA unless otherwise noted.