The Gutter is a melee weapon in Fallout 76, introduced in the Wild Appalachia update.

The Gutter is a unique Assaultron dominator arm blade dismounted and then made into a usable melee weapon. The handle appears to be made from components of an assaultron's lower arm, with a grip wrapped in black electrical cable insulation. The weapon is similar in size to a machete.

The legacy variant obtained prior to One Wasteland through Waste Management does not have the Settler paint scheme, but can be dropped, traded, and sold to vendors.

The One Wasteland For All variant obtained through Daily Ops shares the same statistics and primary weapon mods with the legacy variant, but has an orange and yellow Settler paint scheme. While it can be crafted, it cannot be dropped, traded, or sold to vendors. 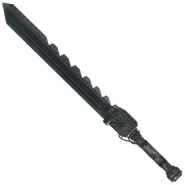