Fallout: New Vegas
“Try 'The Gray.' Beats me why people go into that forsaken thing. At least with huts and sewers you know they ain't crumbling on top of your head.”— Jules

The Gray is a location inside North Vegas Square, near the western junk door.

The Gray is a residential building and the largest structure in North Vegas Square. The Gray is inhabited by numerous North Vegas citizens, most of whom will not speak with the Courier. It is also inhabited by a criminal named Andy Scabb who lives in a room on the first floor. The ghoul has already left the building when the player character arrives. Two of his henchmen with keys to his room patrol the hallway and serve as Scabb's bodyguards.

The Gray appears only in Fallout: New Vegas.

The Gray is situated in the same geographical location as the real world St. Vincent HELP Apartments, within the CARE Complex Homeless Resource Plaza in North Las Vegas, Nevada. 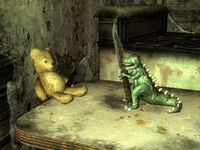 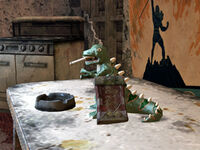