xx008894
“I need you to scout some locations for White Legs and try to recover a map of Grand Staircase, a wilderness area to the east.”— Daniel

The Grand Staircase is a main quest in the Fallout: New Vegas add-on Honest Hearts.

Speak to Daniel at the Sorrows camp. He will ask for the Courier to locate a map of the Grand Staircase region. Optionally, the Courier can speak with Waking Cloud about serving as their guide, or they may decline her help and travel alone.

Travel to Morning Glory cave, which is just south to south-west of the general store. Upon entering the cave, Waking Cloud will warn the Courier that they should not be there because it belongs to The Father in the Cave and it must not be profaned with their touch. There is then a choice of a few different conversation options, any of which will accomplish the task of getting her to proceed into the cave. The Courier may also have her wait outside the cave prior to entering and go in alone.

Within the cave there can be found three giant spore plants and sometimes 2-4 spore carriers along with several strategically placed bear traps and rigged shotguns. There is an Average locked door in the southern section of the cave behind which contains a Survivalist hidden cache containing the map of the Grand Staircase. The lock may be picked or the Morning Glory's cache key can be retrieved and will unlock the door. The key is located in a duffle bag high up in the northern most area of the cave. Once the map is retrieved the quest is complete.

The Grand Staircase is a real-life regional feature that encompasses Zion National Park as well as several other national parks and monuments. 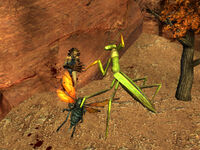 Leveled creatures attacking outside the cave 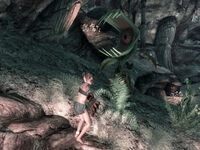 This spore plant will get in the way 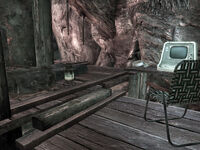 Survivalist hidden cache on the left contains the holotape 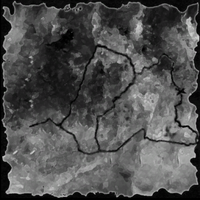